Restored Ernst Kaps high quality overstrung upright with responsive touch, and warm, full rounded tone. This beautiful upright was the instrument of choice for Percy Grainger and other famous artists. Ernst Kaps has greatly contributed to the invention of revolutionary piano systems and the general evolution of the piano on the whole. The original ivory keys are perfectly weighted and there is good depth of tone throughout. The bass register is rich and potent, with considerable volume and presence due to large intact soundboard and Panzer System. Cast iron frame, tight tuning pins, effective brass pedals, stable pitch, and ideal for all levels of player. The original casing is decorative with fine Floral carvings. This piano has a superb powerful tone and for its age plays perfect, better than a Yamaha in its own standing.
Dimensions:
Width: 152cm
Depth: 66cm
Height: 135cm

Ernst Kaps Piano Fabrik is a fine German piano manufacturer founded in 1858 with the original factory at 20 to 22 Seminarstrasse in Dresden, Germany. Kaps acquired the title of ‘Purveyor of the Kingdom of Saxony’. Ernst Kaps was born in Döbeln on December 6, 1826 and died in 1887 in Dresden (Saxony). Kaps was appointed in 1879 an honorary member of the Royal Swedish Academy of Music. His son Ernst Eugen born in 1864 died in early 1910 in Dresden under suspicious circumstances. A report suggested he may have taken his own life as a result of his company facing receivership. In 1876, the company exhibited at the Centennial International Exhibition in Philadelphia. 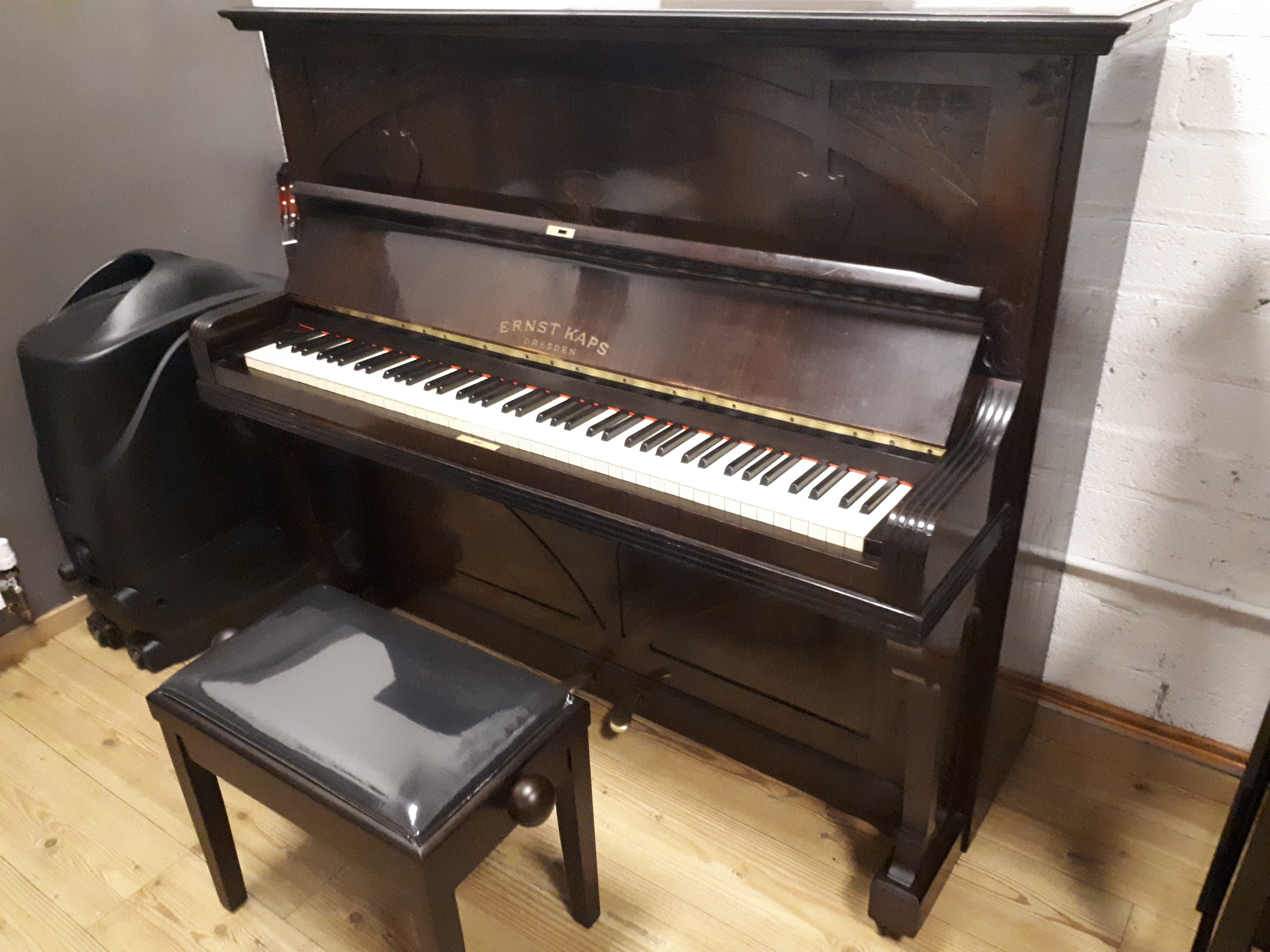 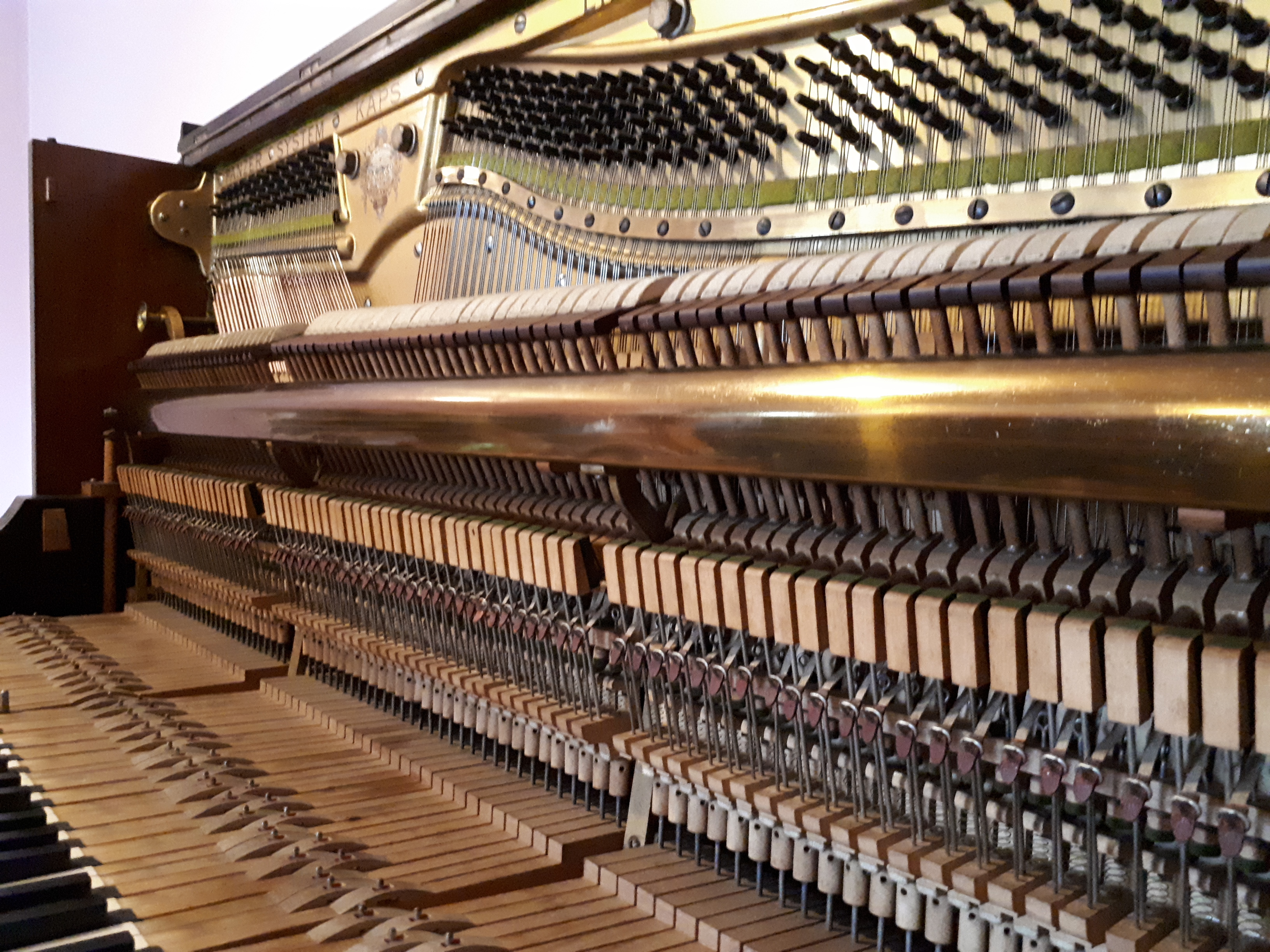 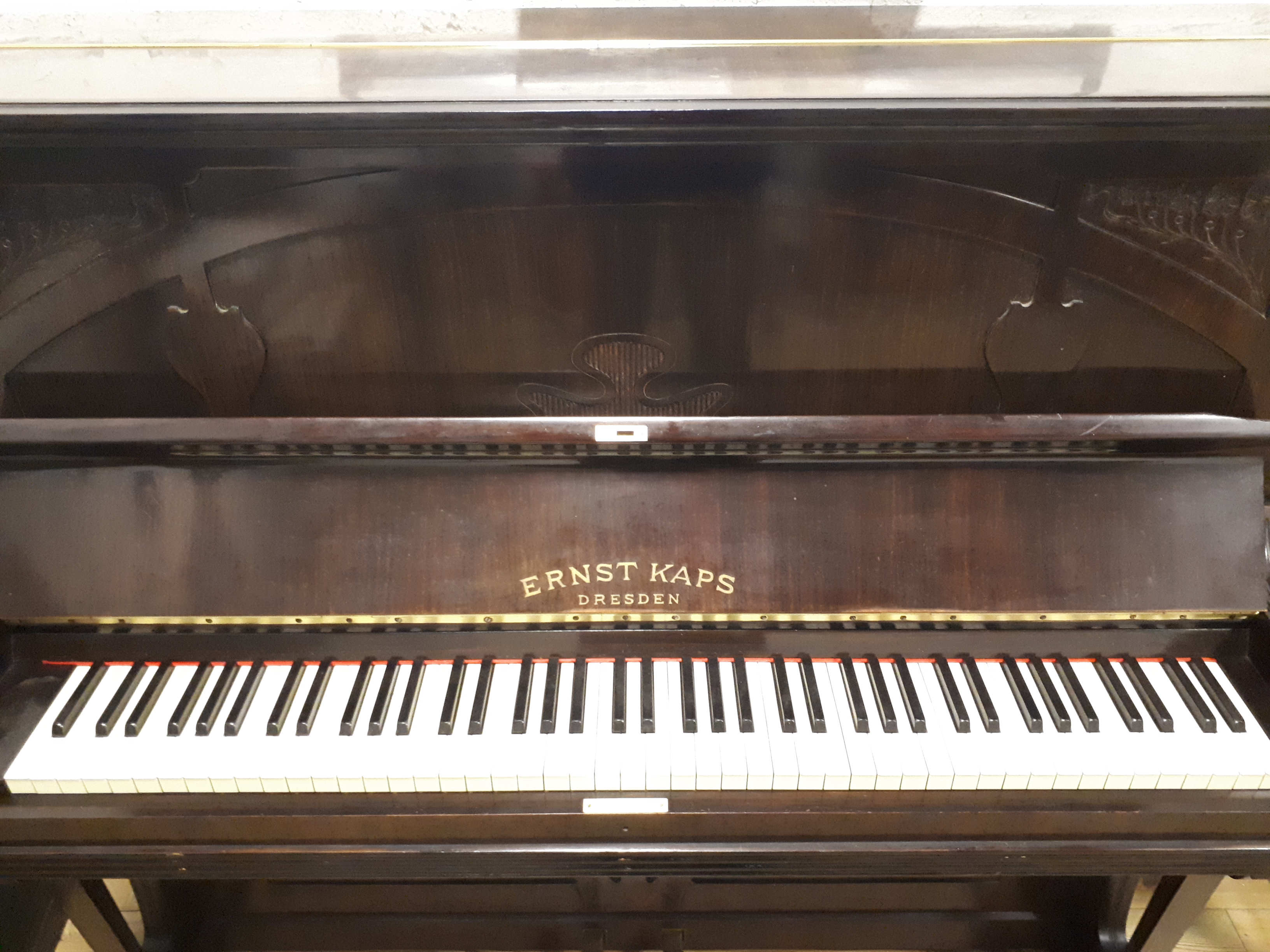 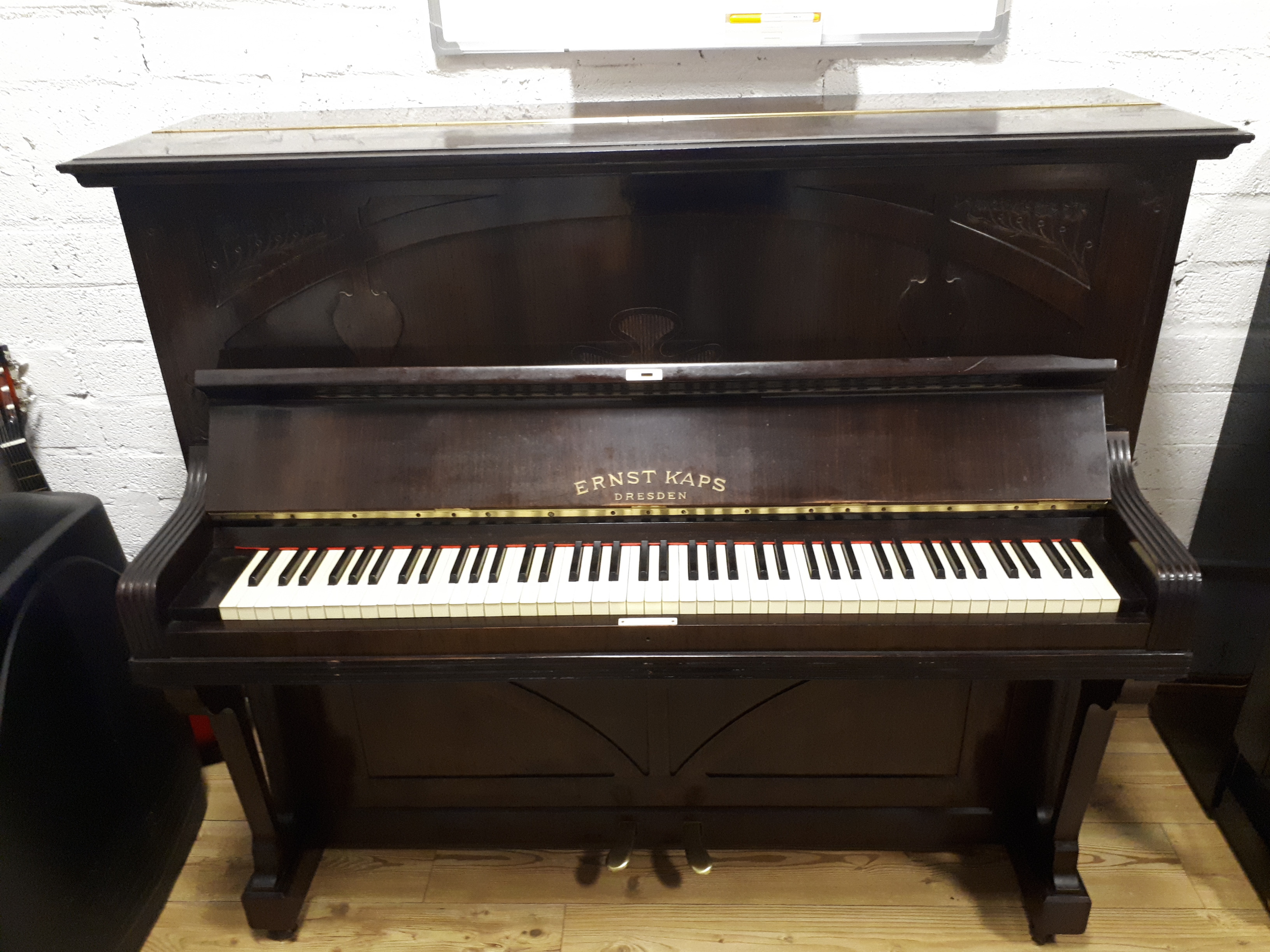 In 1922, the company then known as Ernst Kaps Piano Fabrik AG merged with another company, owned and founded by Johann Kuhse, whose piano manufacturing business was originally founded in Dresden in 1874.  In 1925 the factory, then known as the Kaps/Kuhse Pianoforte AG, made both piano brands alongside each other. The Dresden factory closed in 1930 and at this point the company had reported its final serial number as No. 37500. The Dresden factory produced 37,500 pianos and grand pianos and ever since 1885 manufactured a consistent 1000 pianos per year. There were showrooms at 13 Altmarkt, Dresden and 18 Schloss Strasse, Dresden with branches in Paris, London, Irkutsk Oblast and St Petersburg Russia. Production resumed under ownership of an Australian company in 2012.

It was Jean-Henri Pape (1789–1875), the teacher of Carl Bechstein, who invented and put into use the system of high tension steel strings and copper wound over steel in pianos. Pape, who was also the true inventor of the overstrung piano in 1826, along with many other successful and not so successful inventions, invented the design of an additional pressure bar or individual capo/s located between the hitch pins and the bridges (a similar system later patented by Theodore Steinway in 1872) now known as "duplex scaling". He also introduced the use of compressed felt for hammers. A good number of these are still in use today. 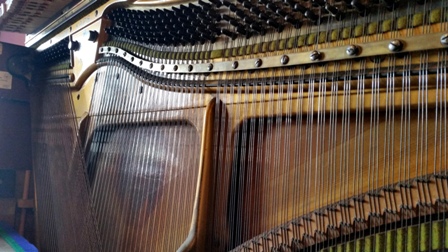 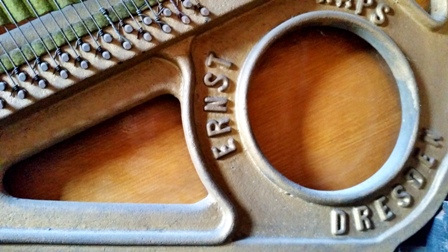 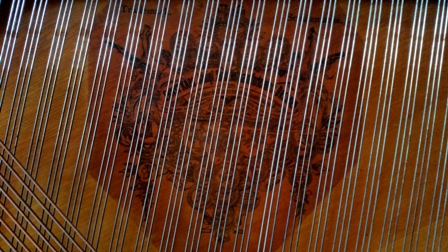 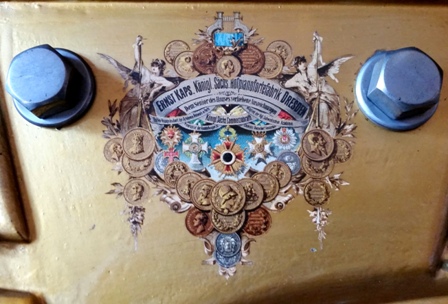 Some of Pape's more successful inventions were employed by a small number of manufacturers fairly early in piano making history, such as Erard, Steinweg, Steinway and Ernst Kaps. In discussions with Pape, it was Ernst Kaps that expanded on Pape's design, inventing a system of double over-stringing in 1865. This design employed three bridges, Bass, tenor and treble, enabling the production of the, previously troubled, baby grand piano. This then allowed for a 5 ft (154 cm) length piano to be successfully produced early in piano making history.

As a result of this and other effective inventions, including one known as the "Panzer system" in upright pianos, the company enjoyed many years of commercial success prior to the Dresden factory ceasing production in 1930 reported to have produced some 37,500 pianos at that site.

Ernst Kaps obtained a number of patents on various interesting inventions. One of these included the "resonator". This consisted of an additional sound-box with small sound ports (holes) drilled through the top. These were fixed to just below the tenor and treble bridges along the bridges profile. The idea of these were that this would create a larger vibrational mass and additional coincident partials (harmonics)—a complex endeavour to attempt a fuller and more colourful sound.

The inventions and developments of Kaps were often patented, including a resonator and a baby grand piano (double overstrung grand piano). Other similar and ingenious inventions were patented by Ernst Kaps such as a device that extended the soundboard into the grand piano lid.  Although revolutionary, most were not economically practical and were not commercially produced.

In 1865, Kaps built the first double overstrung grand piano. Named ‘the system Kaps’ which referred to a triple bridge arrangement to aid the awkward scaling design, limited by the previously unsuccessful, small sized grand, which were only about 1.50 m long. These, at the time were characterised as having both "solidity and durability of tone" as well as "a lovely yet powerful sound for such a small piano".

Percy Grainger learned to play on an upright parlour piano of Walnut veneer and ivory keys, made and supplied by Ernst Kaps of Dresden to Rose Grainger. He reported to have practiced on it for two hours a day, while his mother Rose Grainger, as his teacher, sat beside him. In 1895 the Graingers left for Germany when the piano was then sold to a Mr. and Mrs. Thomas P. Husband, whose family were also taught by Rose. They kept it for 40 years, before donating it to the Grainger Museum at the Melbourne University in 1935. The piano has now been restored and is housed on display at the 'Percy Grainger Museum Melbourne Australia'.